LATE WAR FIGHTERS OF THE LUFTWAFFEを視聴フルで配信している動画配信サービスの情報 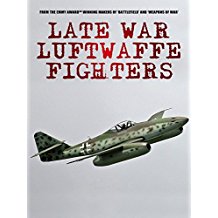 Hitler was losing the war in 1944. In the East, Russians rolled forward relentlessly, threatening the existence of Hitler's Third Reich. Hitler knew that if he were to survive, he needed a miracle. New technologies, or miracle weapons, could turn the tide of war. Against all odds, German engineers not only designed but produced in good numbers some of the best aircraft of the war, the ME262.